I was a latecomer to the Pop Evil train, I admit. My friend Derek is a huge fan of the band and his enthusiasm helped me listen with unbiased ears not long ago. I liked what I heard, listened some more and realized I’ve been exposed to tons of Pop Evil’s music over the last decade through the radio and licensing deals for TV and movies. I was like, “Oh, I know this song. Wait, I know this one, too.” I just didn’t know Pop Evil was the artist. So I listened some more as a johnny-come-lately to the scene and realized all those songs I’d been hearing on the radio for years were from this one band… an amazing, diverse group of musicians from Michigan (with one notable recent addition, which we’ll get to) with solid musicianship and great songs — Trenches, Footsteps, and Waking Lions among them. 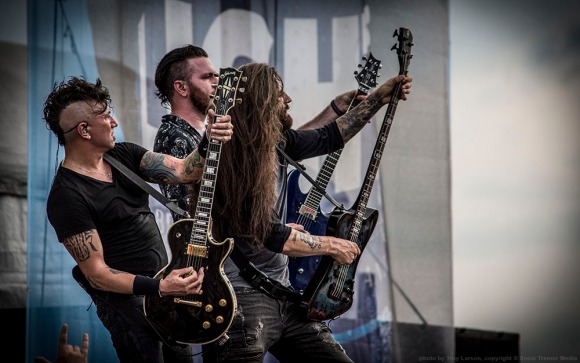 Sometimes (a lot of the time) I get good shots by accident. I came out of the beer garden and looked up to see the scene above playing out on the ego ramp. I barely got my camera up in time to shoot like, three shots. This one was the best, I think. 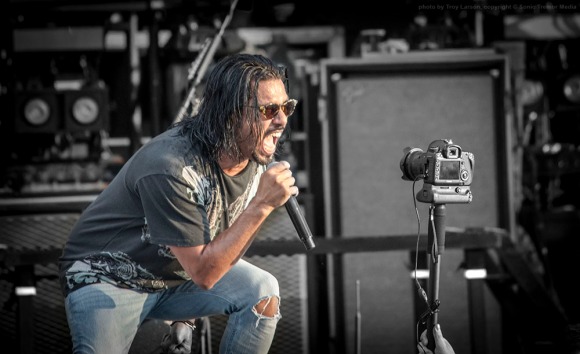 Leigh Kakaty, lead singer, a phenomenal vocalist, charismatic frontman, and a photographer’s dream. In a setting like this, where cameras are allowed and everybody has one in their pocket, he will look around a venue to find the cameras and give ’em something to shoot. In the shot above, Leigh was connected with an audience member down in, like, the second row, and I raised my camera to shoot him, and just before I pressed the shutter, this person down in front raised her camera right in Leigh’s face and he responded with that toothy snarl. I snapped, and that’s the photo above. I’d really love to know if her camera was rolling and see what she got. Talk about up-close-and-personal.

Now look at this. 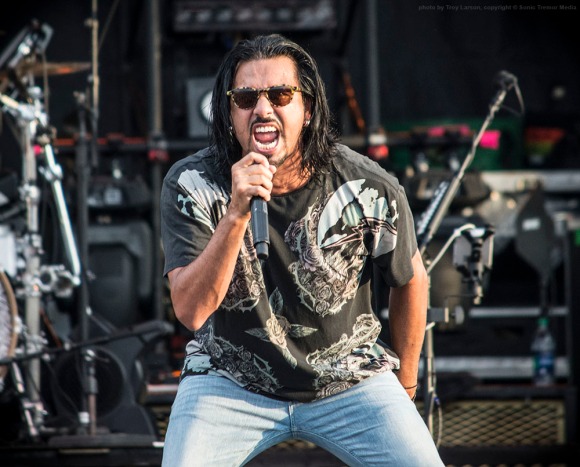 That’s Leigh Kakaty and he’s looking right at me. And I was standing 70-80 feet away. Although a shot where the subject is looking right at the camera is seldom the best shot, I like that he sees the cameras, and acknowledges them with a performance.

Now, did you know Pop Evil, in addition to having a dozen bonafide hit songs, also has a new member? Her name is Hayley Cramer. Click through the gallery for more on that.

The show was excellent and, no offense to Bush who are a perfectly good rock band, it should have been billed as a co-headlining event between Pop Evil and Bush, because when it comes to putting on a show, Pop Evil is the superior act.